Literature in a Wired World Wiki
Register
Don't have an account?
Sign In
Advertisement
in: Related Topics 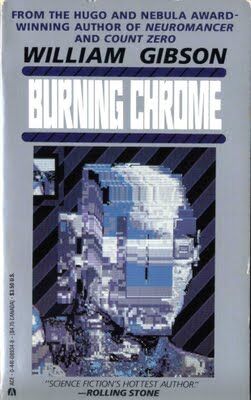 "Burning Chrome" tells the story of two professional hackers, Automatic Jack and Bobby Quine. Jack buys a piece of unknown software that turns out to be a sophisticated and almost untraceable Russian hacking software. Bobby decided to use this software to break in and steal money from a high level and well connected criminal known as Chrome. After Jack agrees, the two hackers successfully break in and steal money as well as take down Chrome.

Bobby: Specializes in software, but he is going to retire from hacking and has been looking for one last big score. He is a relatively small time hacker, because of the threat of treading on the turf of Chrome.

Jack: Specializes in the hardware aspect of his hacking duo with Bobby Quine. He makes up for losing his arm in a war with his almost bionic arm and he does everything from fixing and building the hardware he and Bobby use, to purchasing the necessary hardware and software for their hacking needs.

Rikki: Bobby's love and new addition to the group as the big score gets planned and executed. She is interested in the hollywood scene and as Bobby and Jack pull off the job, she leaves for hollywood, leaving Bobby and Jack in grief.

Chrome: She is a big time criminal who deals with money for crime syndicates and has a lot of money, power, and connections. Although she is not a big part of the plot she is the extremely dangerous target Bobby has chosen to rob. Chrome starts the story as someone who is untouchable, but after losing her money is able to be held to her crimes as she does not have the infleunce and power to protect her.

The Finn: He is the person who sold Jack the Russian software that was used to pull off the big score.

mWilliam Gibson: Born in South Carolina and after his father choked and died while on a business trip, he moved with his mother to Southwestern Virginia. With the town Gibson moved to had not embraced modernity well and the sudden move, he delved into the world of science fiction. At the age of fifteen he was sent to a boarding school in Arizona and started to move away from the Lovecraftian science fiction and searched for something different. When his mother died he left the boarding school without graduating, he traveled for years, getting married and eventually moving to British Columbia as he earned his bachelor's degree. In 1977 he looked back at his interest in science fiction and with the state of New York and London at the time started Cyberpunk.[1]

In Burning Chrome the author, William Gibson, attempts to portray an atypical postmodern setting, a possiblity of how computer systems will behave in the future, and how the people who attempt to breach them will do so with the more advanced tools of the time. Told through the perspective of hacker Jack and his partner Bobby, the story illustrates various themes, including dystopian elements of future crime, ambition, and, ultimately, love and loss.

The story focuses on the convergence events surrounding the night that Jack and Bobby hacked the computer program known as Chrome, a network of criminal connections and transactions. The main character, Jack, recalls events leading up to the attempt to "burn Chrome," revolving mostly around the details of a girl, Rikki Wildside , in their lives. Burning Chrome contains several important themes, the two most important being the influence of love and loss, and the consuming nature of technology.

One of the more important symbols of the bond between Rikki and the hackers is Bobby's choice to use her photograph in place of that of Chrome's standard digital avatar. Chrome is not given a particularly favorable description by the hackers in their recourse of events:

Chrome: her pretty child face smooth as steel, with eyes that would have been

at home on the bottom of some deep Atlantic trench, cold gray eyes that lived

under terrible pressure. They said she cooked her own cancers for people who

crossed her, rococo custom variations that took years to kill you. They said a lot

of things about Chrome, none of them at all reassuring. [2]

Instead of facing such an intimidating force, withing the matrix, Bobby chooses to replace this image with one of his beloved Rikki. Much can be interpreted from this action. Ordinarily on jobs the duo is absolutely professional. They are beginning to let emotion creep into their work, which could prove to be dangerous for them, but this job requires an incredible amount of discipline and precision, infiltrating multiple layers of digital security. The motivation that Rikki is behind them gives them an unrivaled confidence, one that pushes them to complete their goal.

They finally accomplish it, they break Chrome down into tiny pieces, keeping ten percent of it for themselves, and donating the rest to charity. The hackers have succeeded, and just as suddenly as their success jumps into their bank accounts, they are defeated on the home front. It comes to Jack's attention that Rikki is actually a prostitute for the infamous "House of Blue Lights." Inexplicably, the house is shut down just as the hackers finish their job, and, as it turns out, Rikki gained quite a substantial bit of money from this endeavor. Just as soon as she entered their lives, she was gone. Her purpose for Bobby had been fulfilled, but that was the old Bobby. This new Bobby is different, has loved and lost. Hurting, he refuses to say his goodbyes. For even the most detached among us, such as Bobby, love and loss proves to be painful and tumultuous.

Another prevalent theme within Burning Chrome is the consuming nature of technology in our lives. The story portrays the matrix, a virtual representation of the digital world, as a captivating marvel. Physically interfacing with data, computer systems, and mainframes sounds like a fascinating way to go about infiltrating a system, it becomes a wonder whether, spending so much time within the digital world, one might begin to experience the boundaries of reality blurring.

Likewise, the practice of "stimsim" has become a popular recreational activity with many people in the story, primarily Rikki. Hours a day she spends "jacked in" to the unit, the real world, her real life, taking a back seat to experience the thrills and danger of anothers. Adrenaline coursing through her veins, pulse racing, it's a high without a drug. Why should someone live their ordinary life when they could step into the shoes of someone far more able and active? Burning chrome serves as a warning to us, that as technology becomes more and more advanced, we must resist the urge to let it overtake the aspects of our lives that make us human beings.

Community content is available under CC-BY-SA unless otherwise noted.
Advertisement